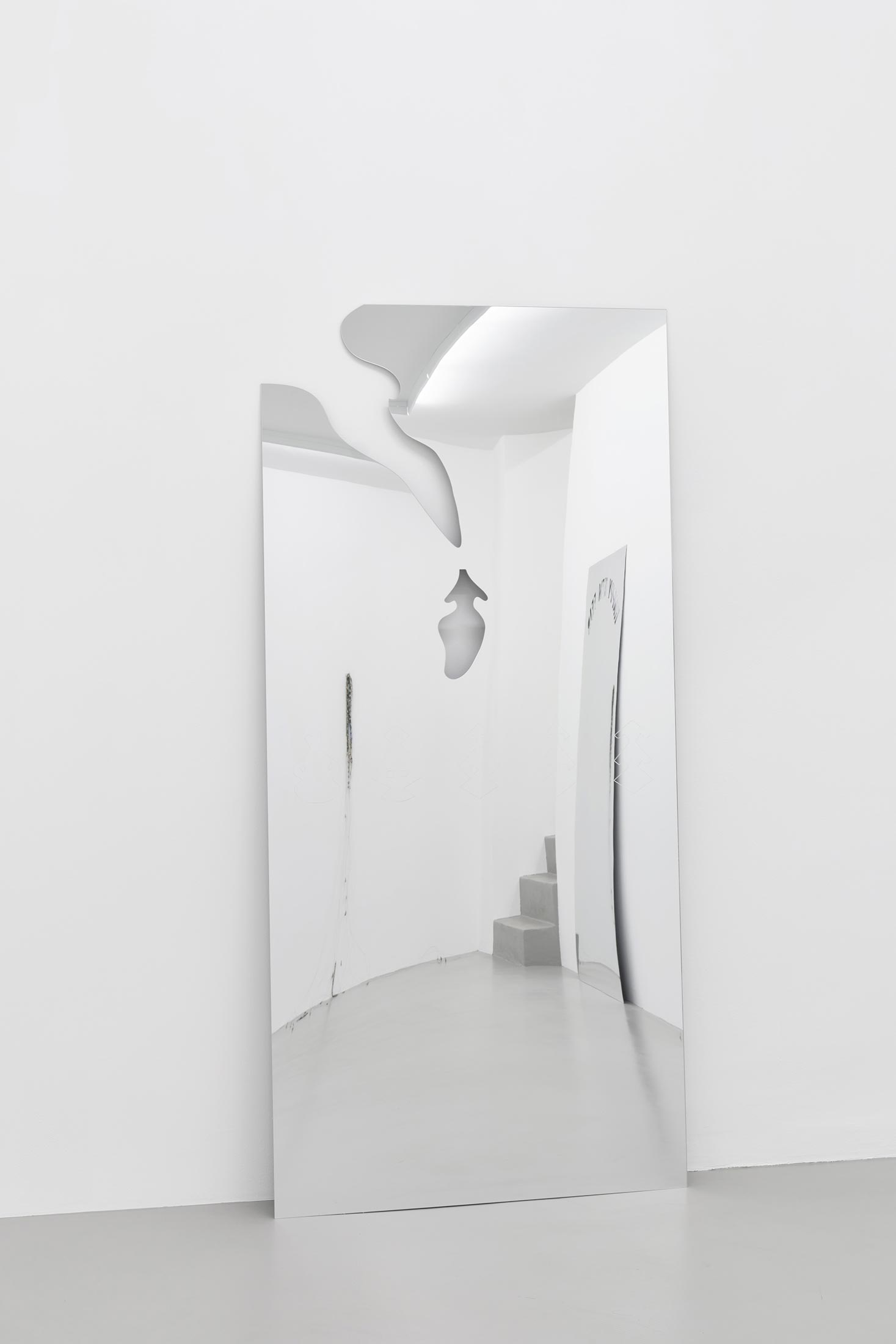 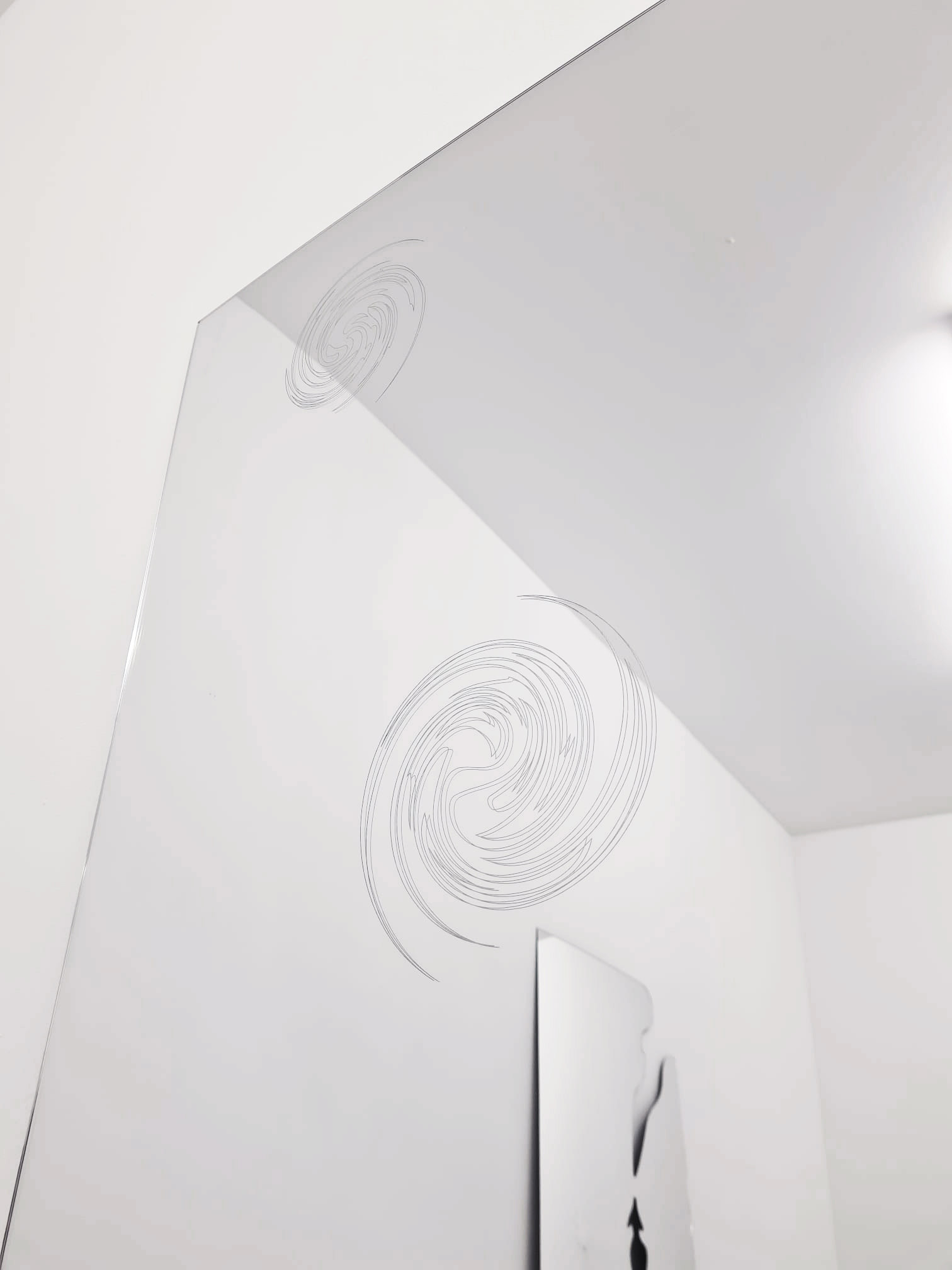 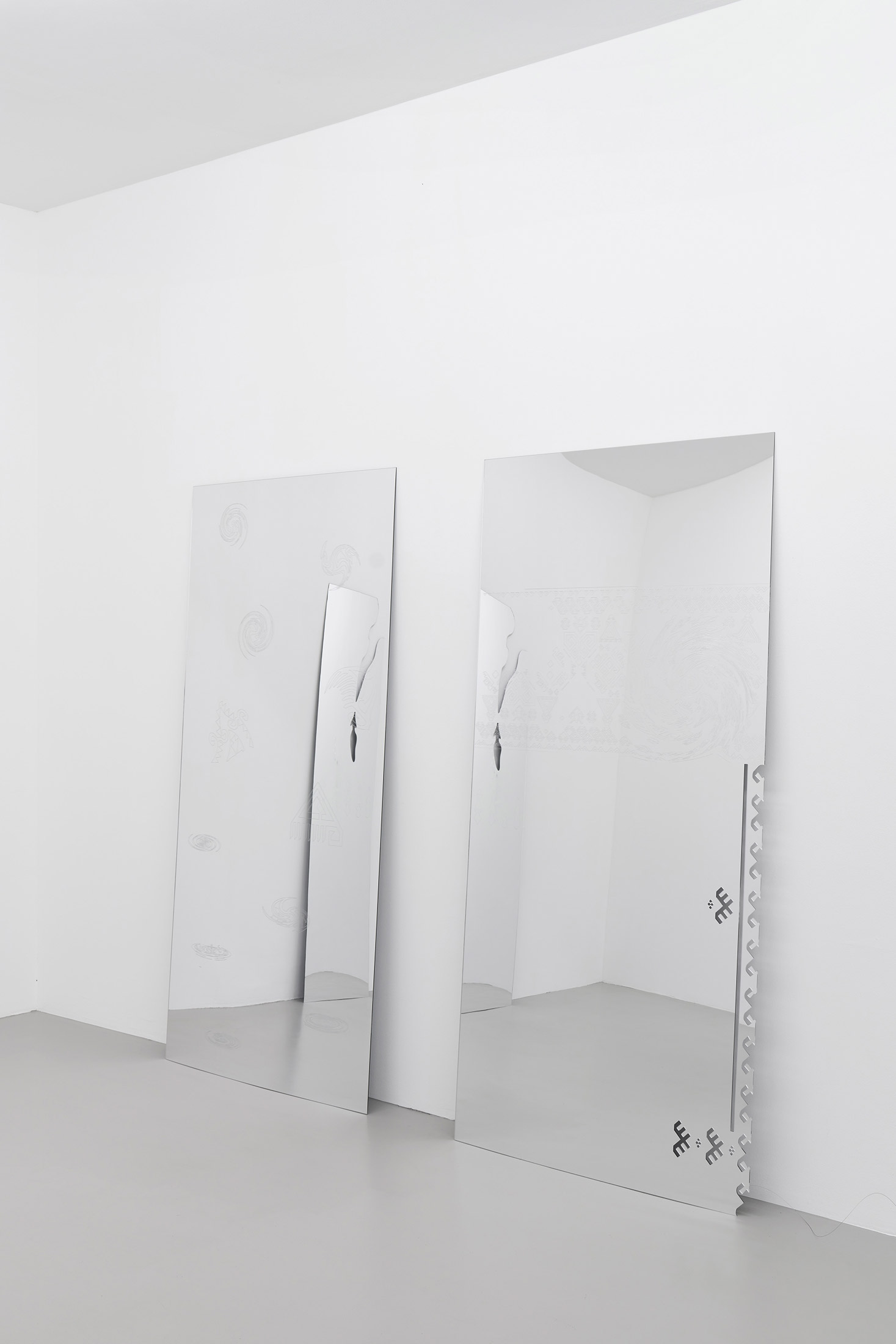 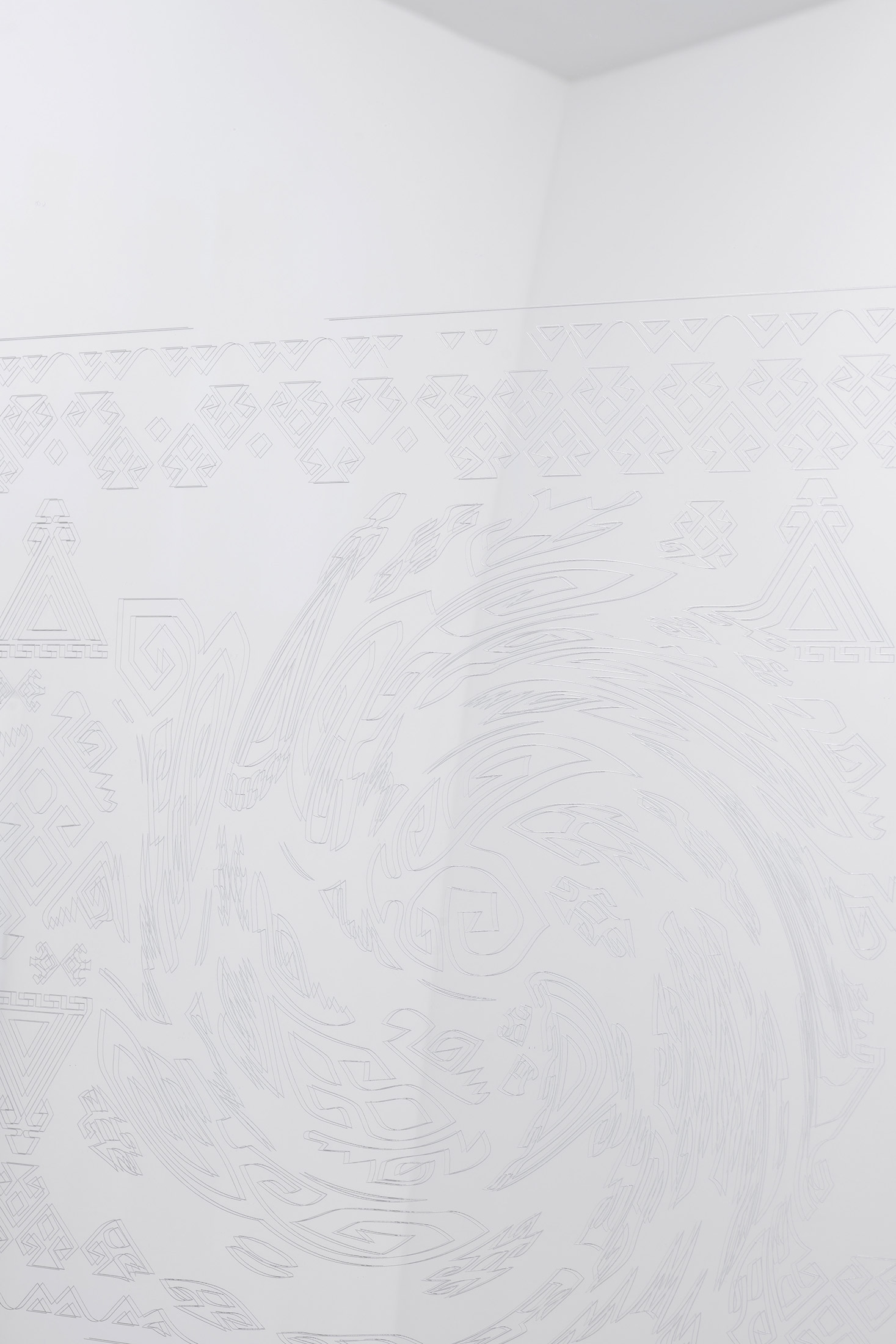 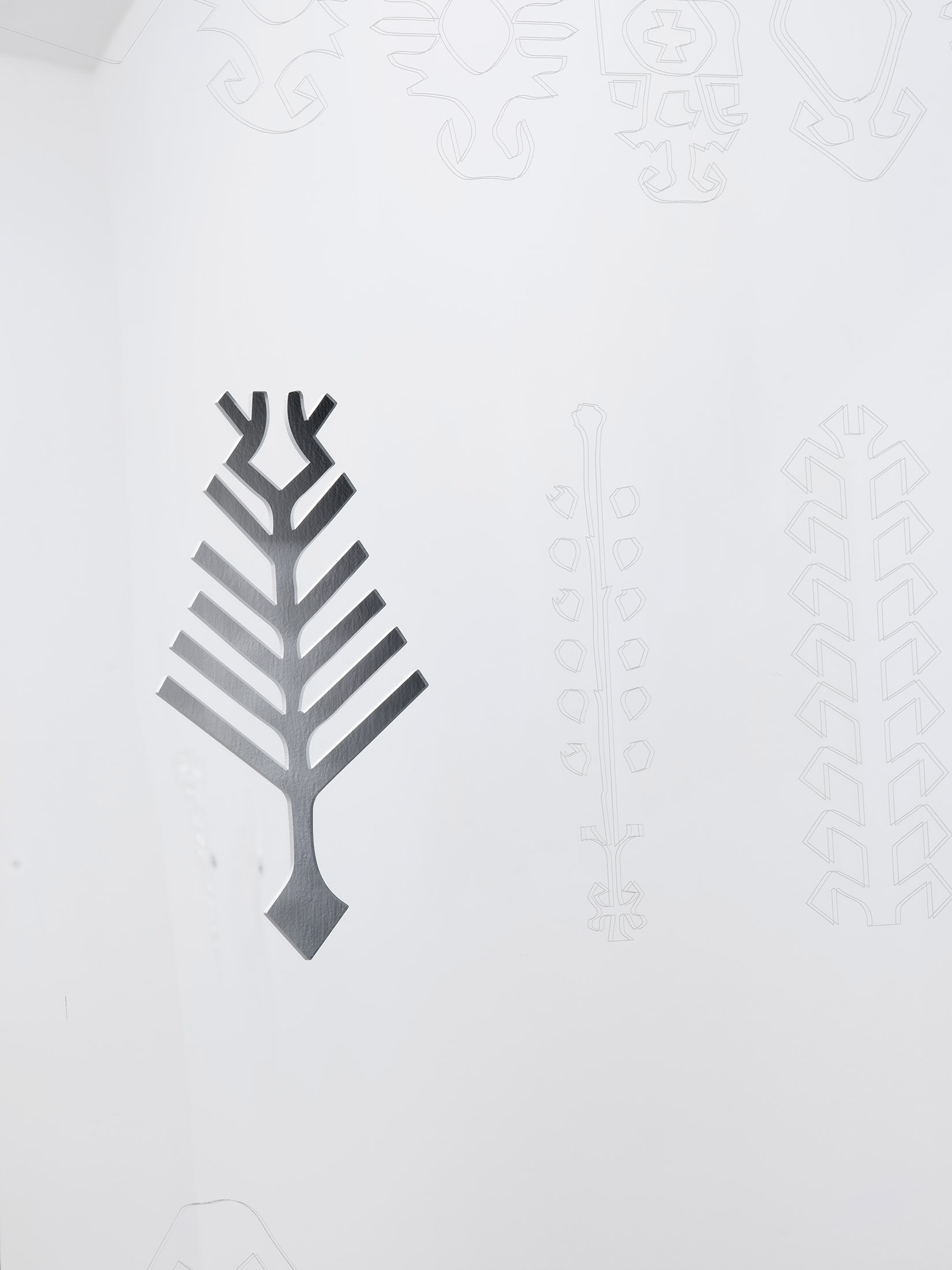 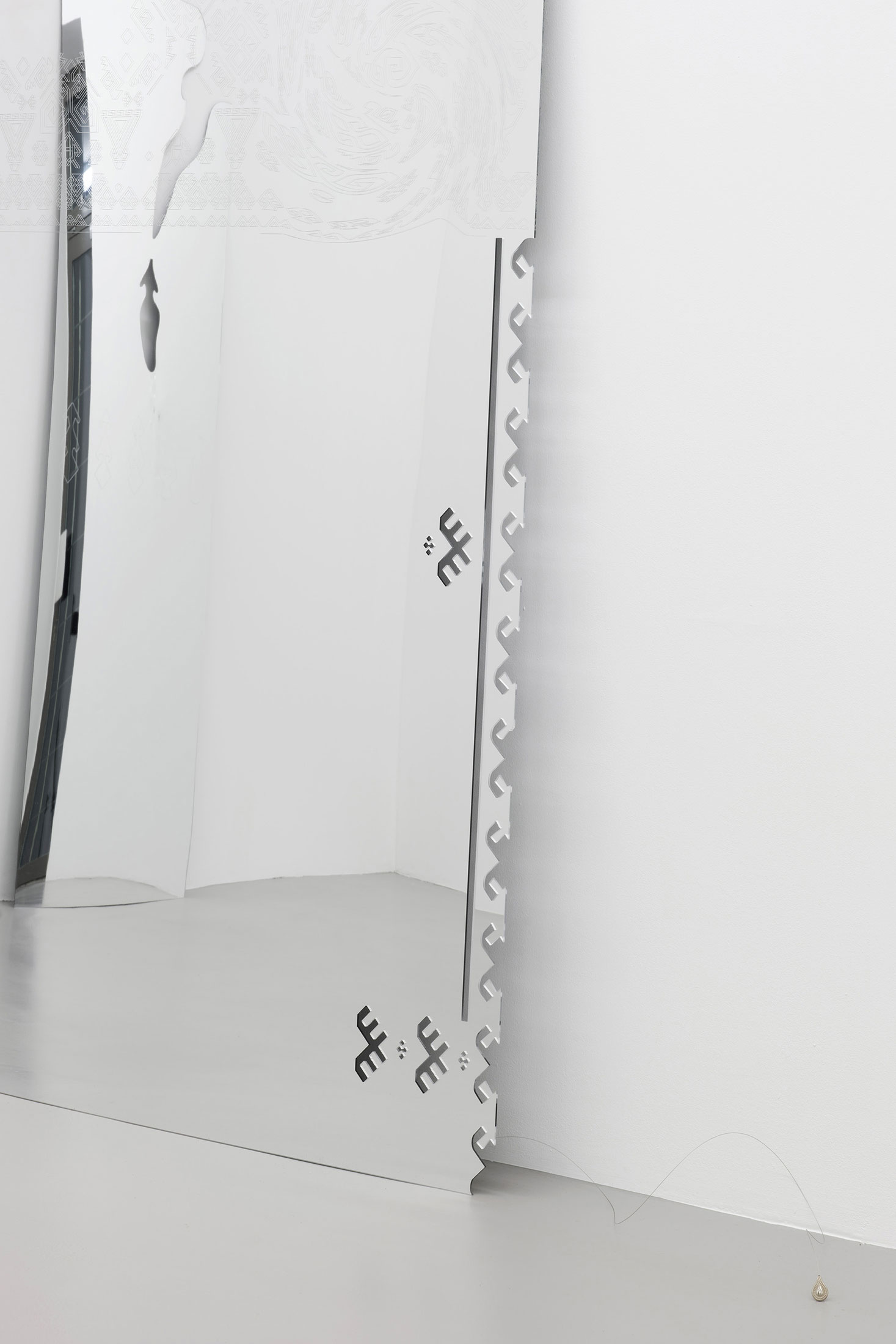 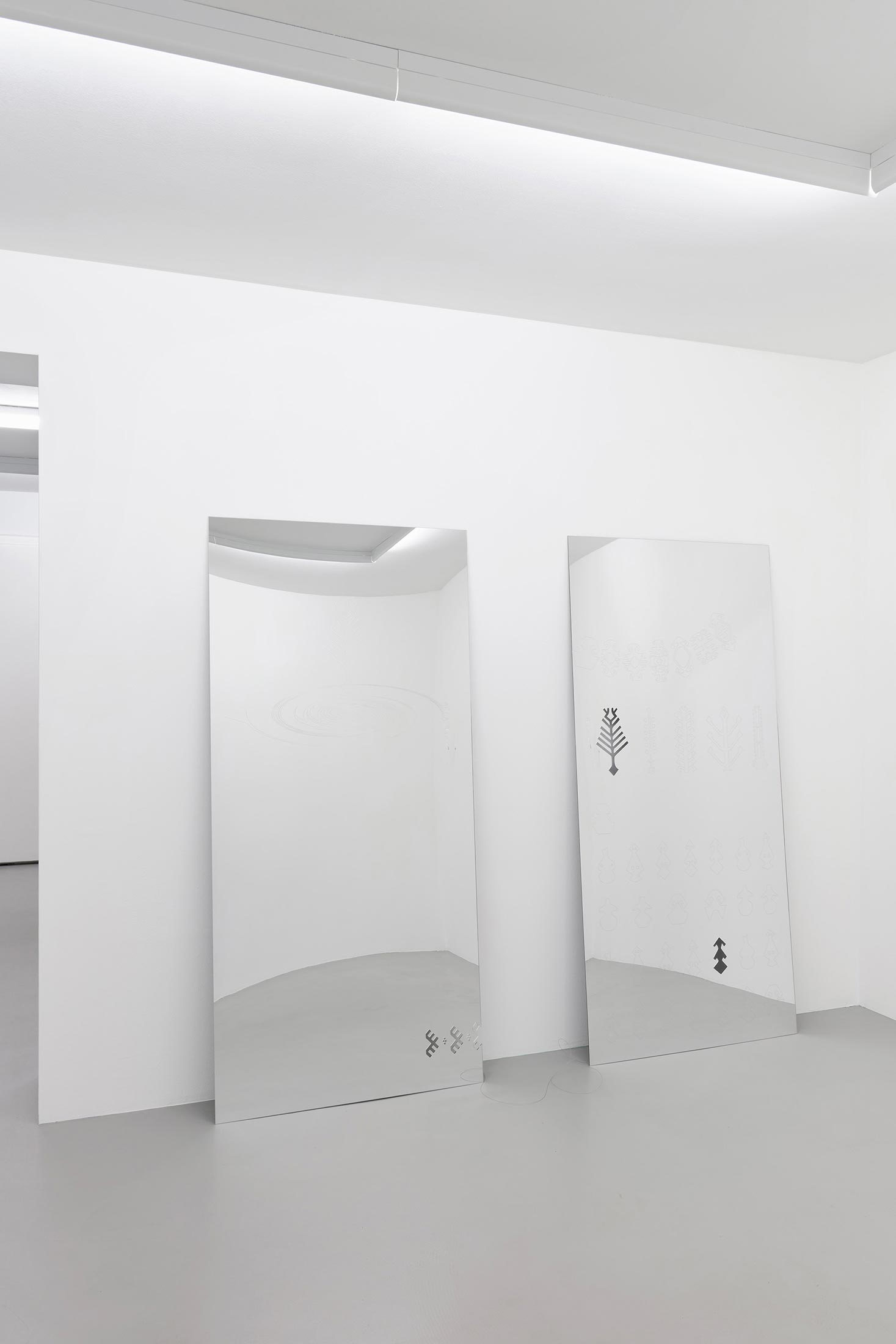 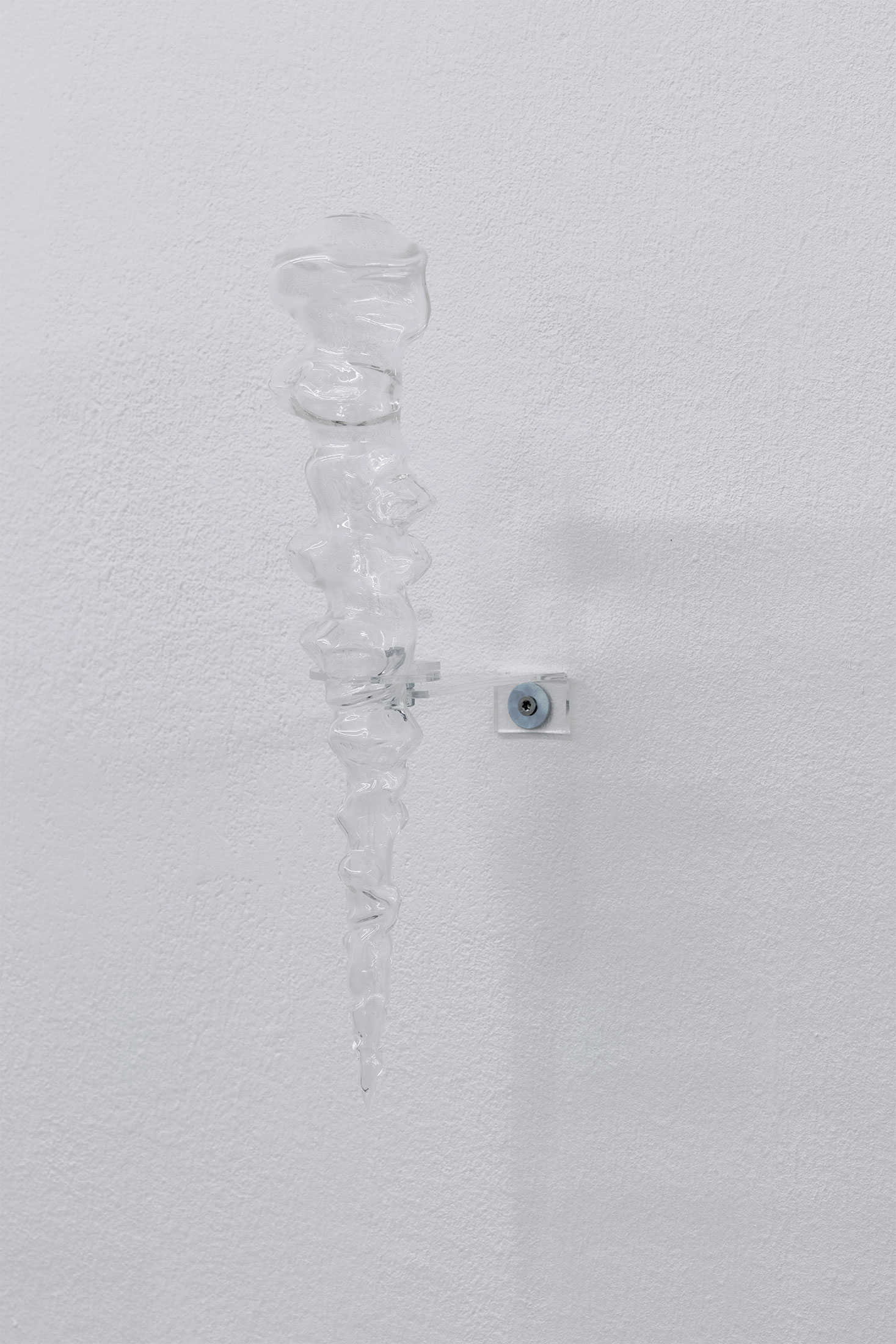 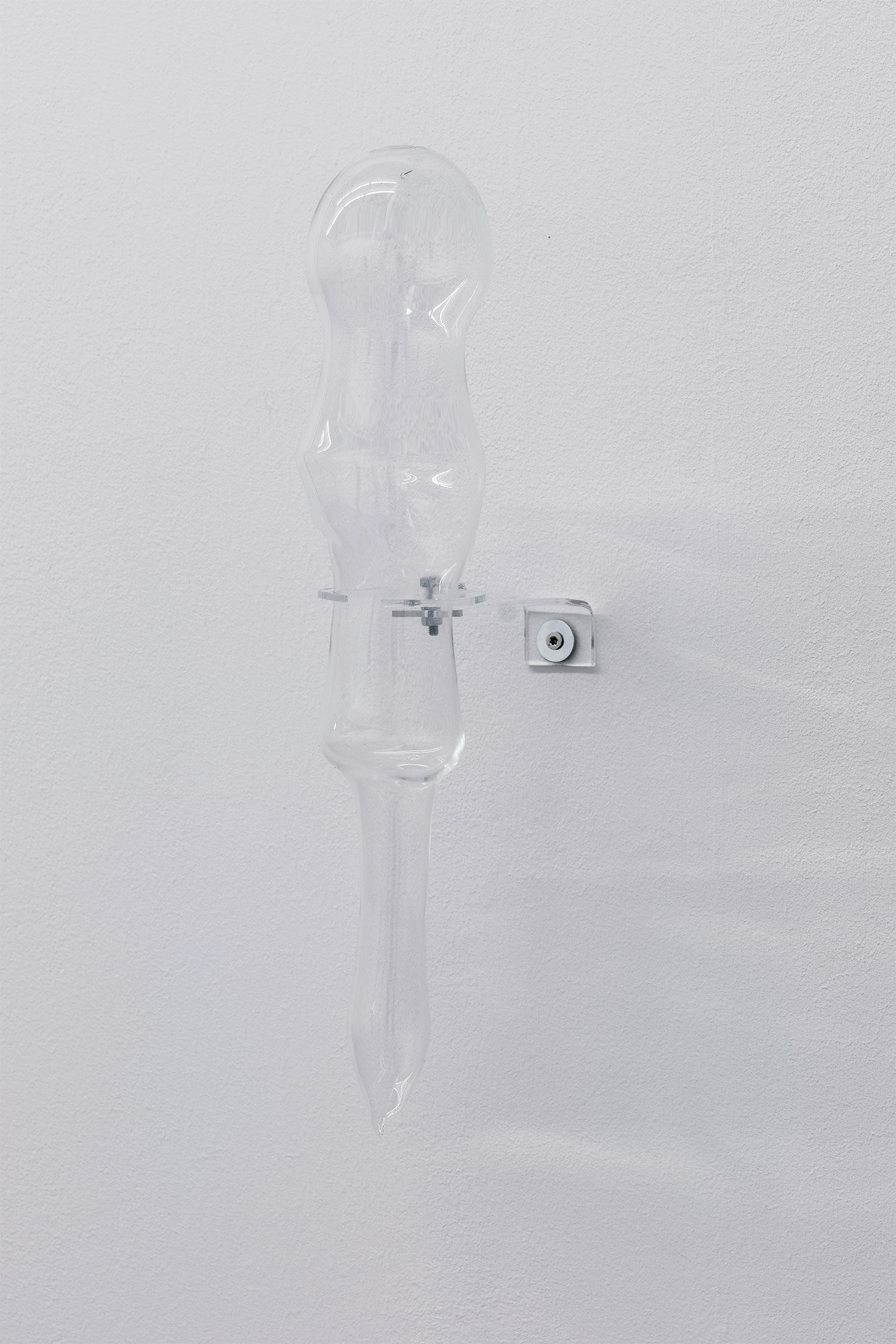 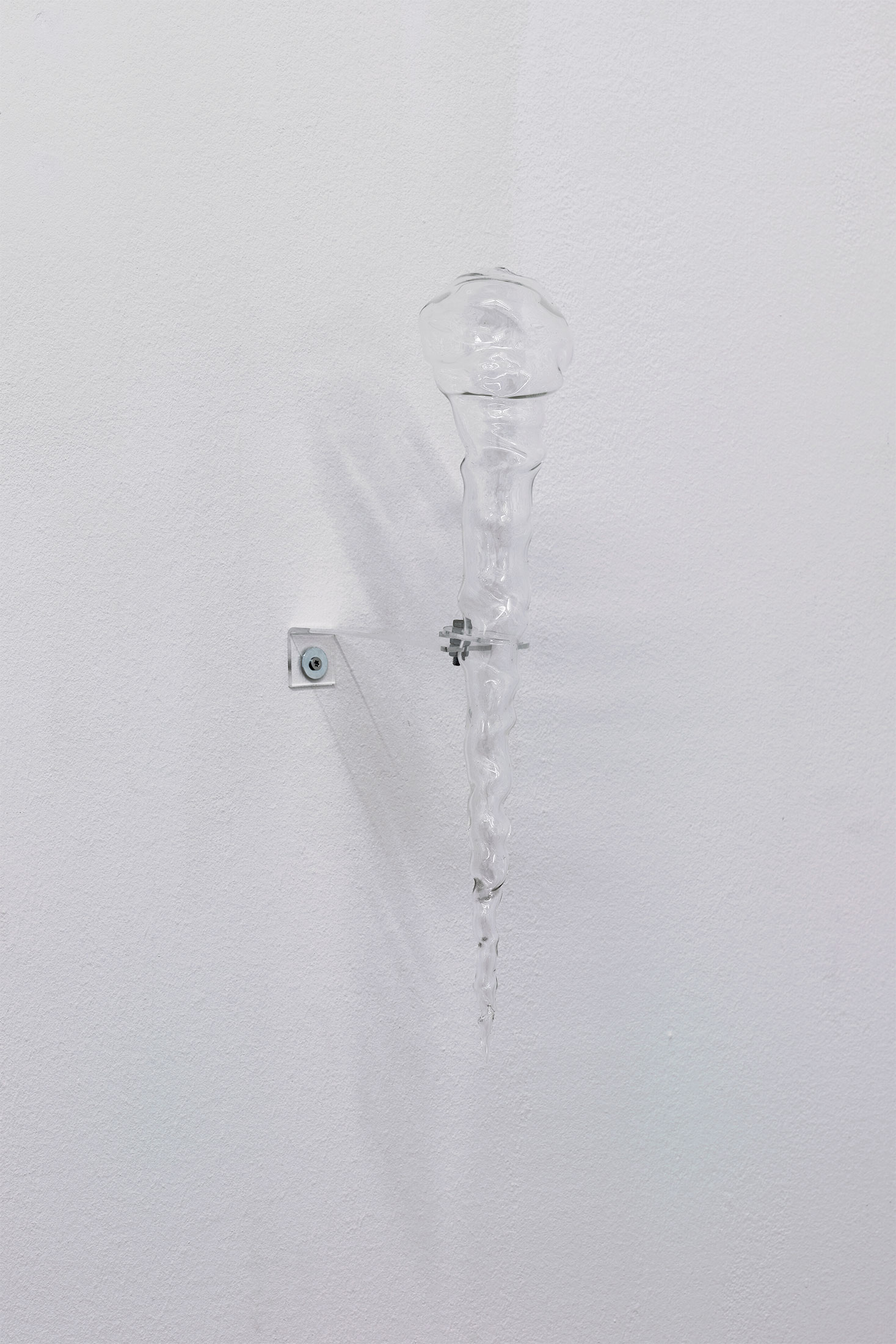 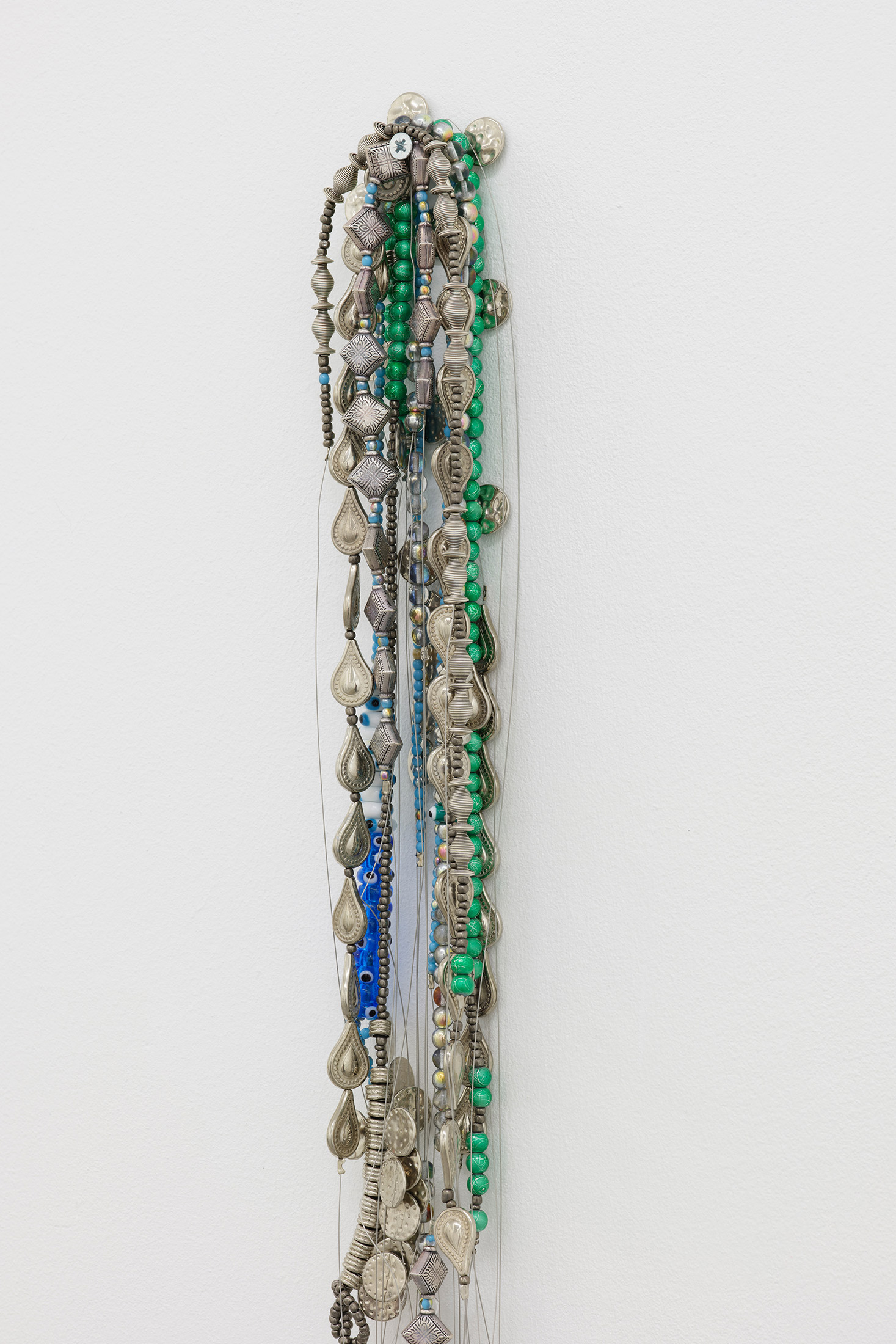 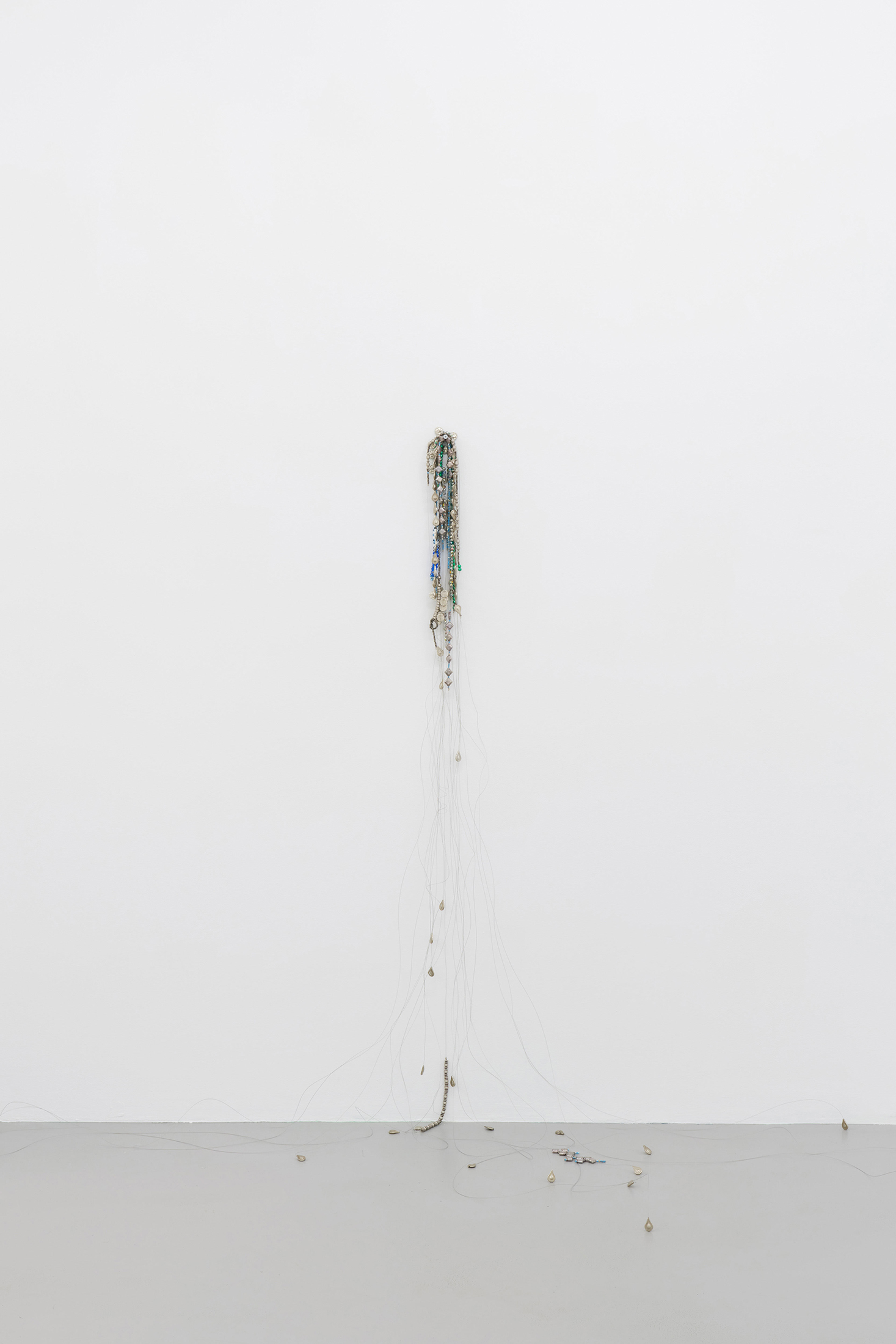 Delving deeply into the assumed boundaries between her own object/subject and the object/subjecthood of her works, Ceylan Öztrük’s solo exhibition is a confession, a guide book, a dictionary, a formal exercise, a feverish novella. Employing various media – blown glass sculptures, beads, reflective objects – the artist comes to terms with constructing and researching from within forms, embedded in a self-referential, nebulous yet concrete lexicon, afforded by sculpture. Self-Specular, a moment is an exhibition based on Öztrük’s exploration of fluidity, as a form and as a method to reconcile with her own coldness in relation to the materialities, that constitute her work, negotiating with and through her touch. 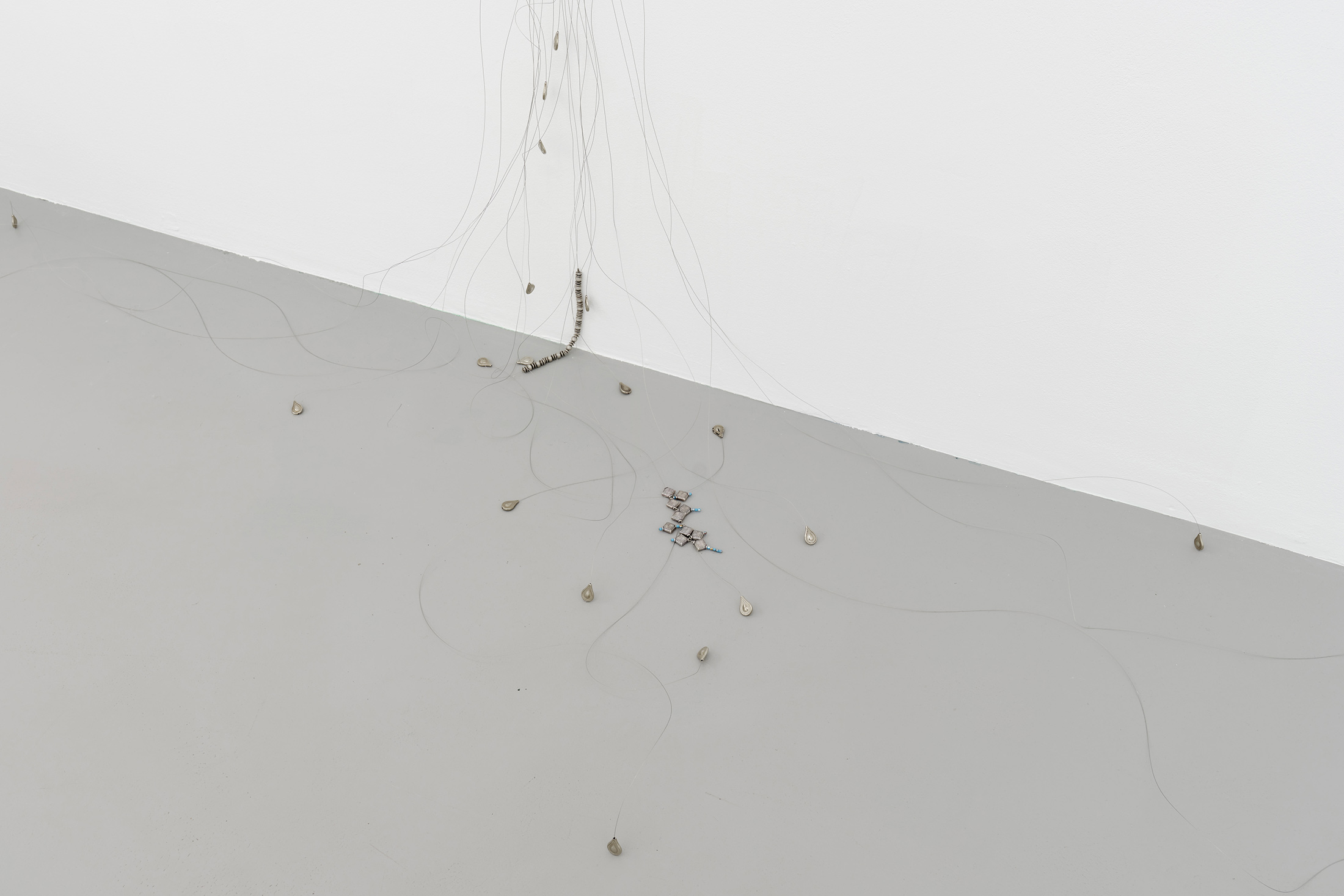 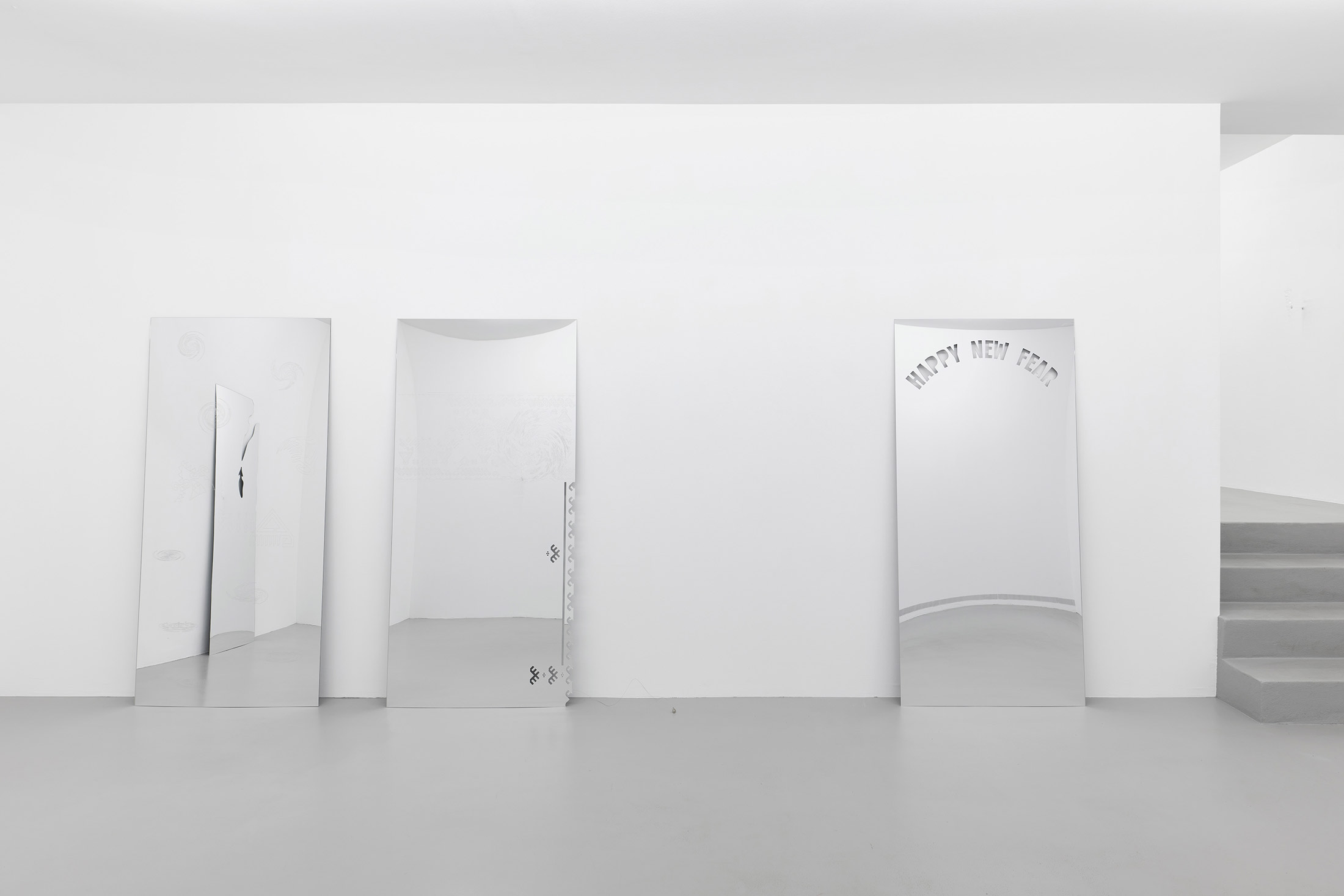 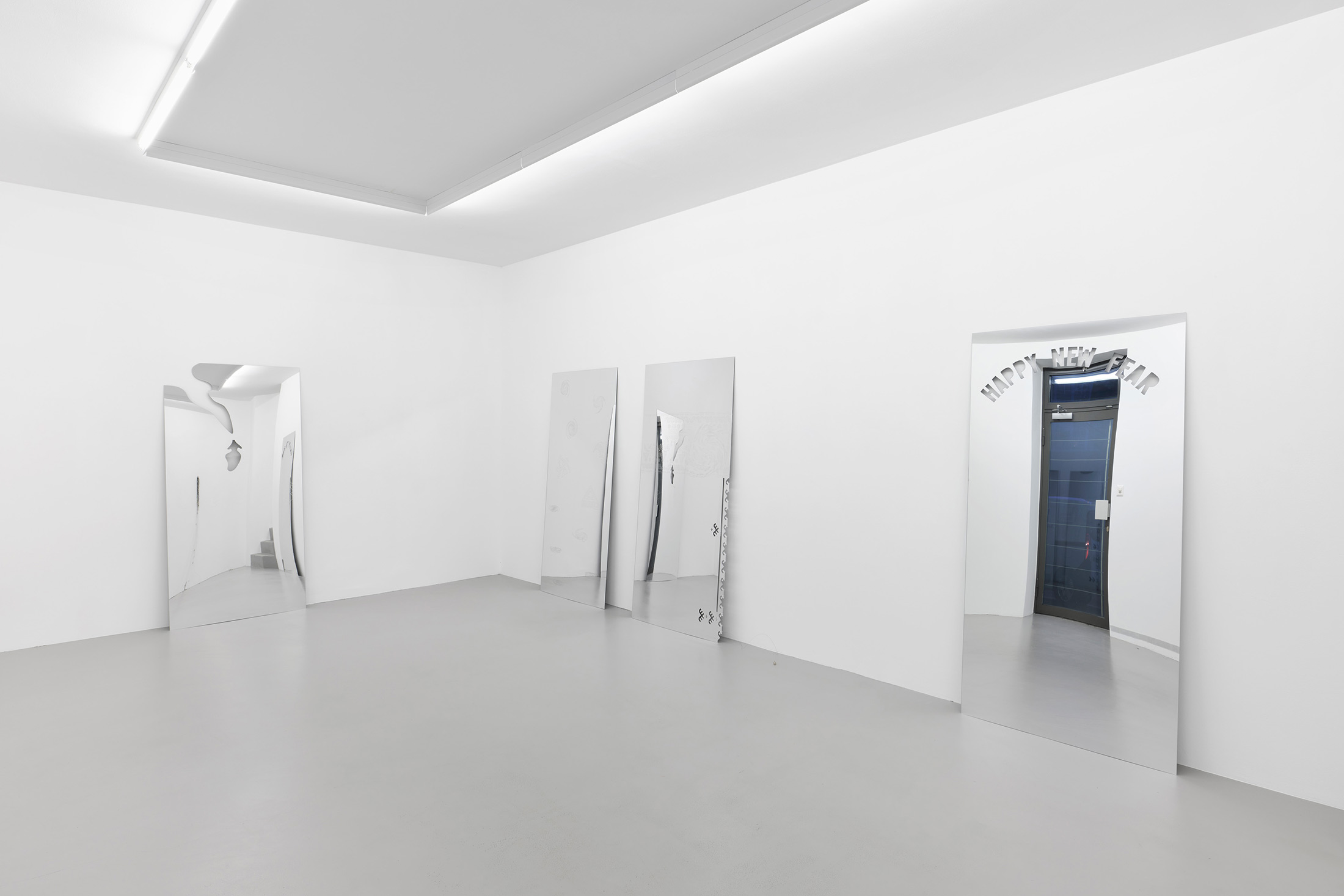 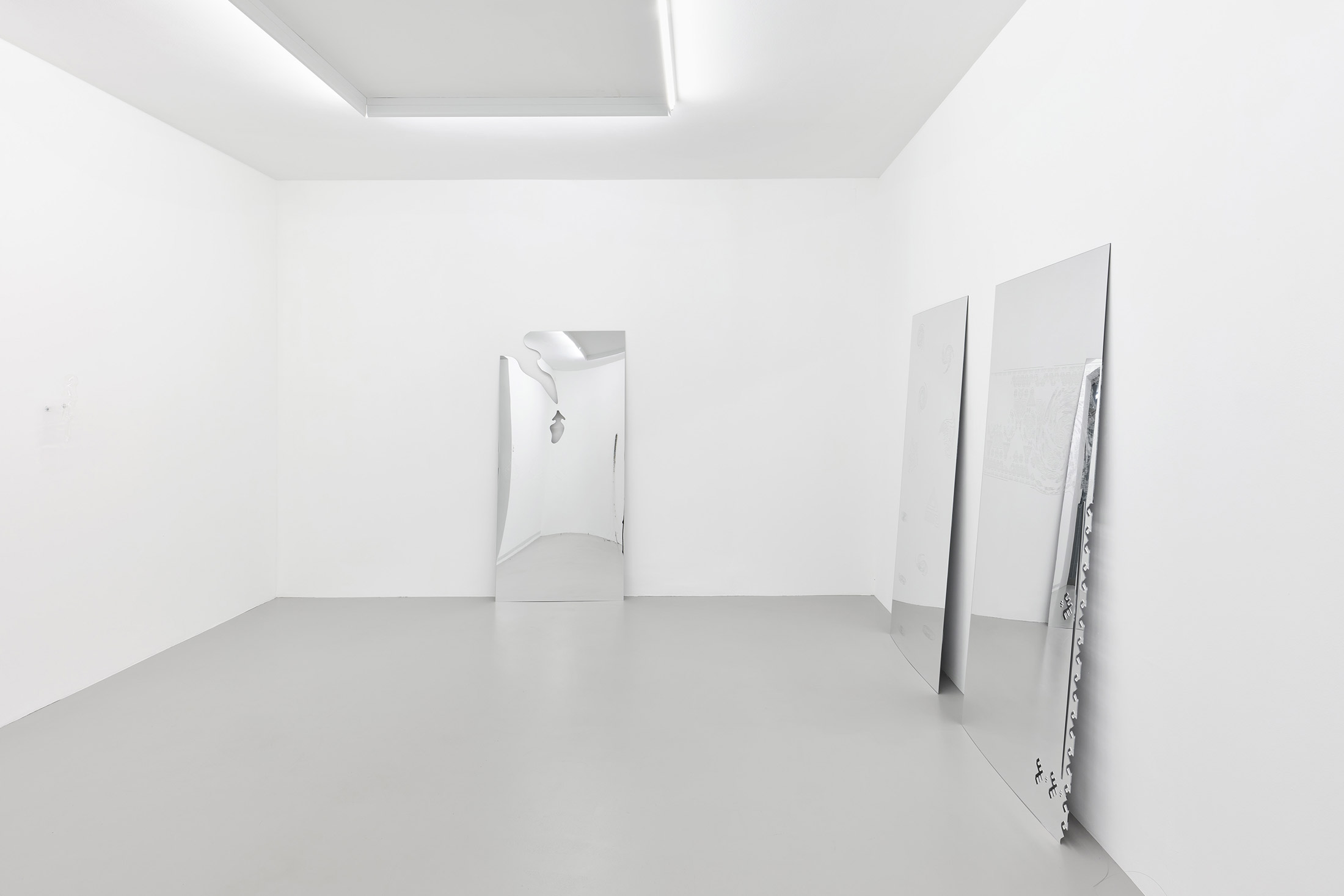 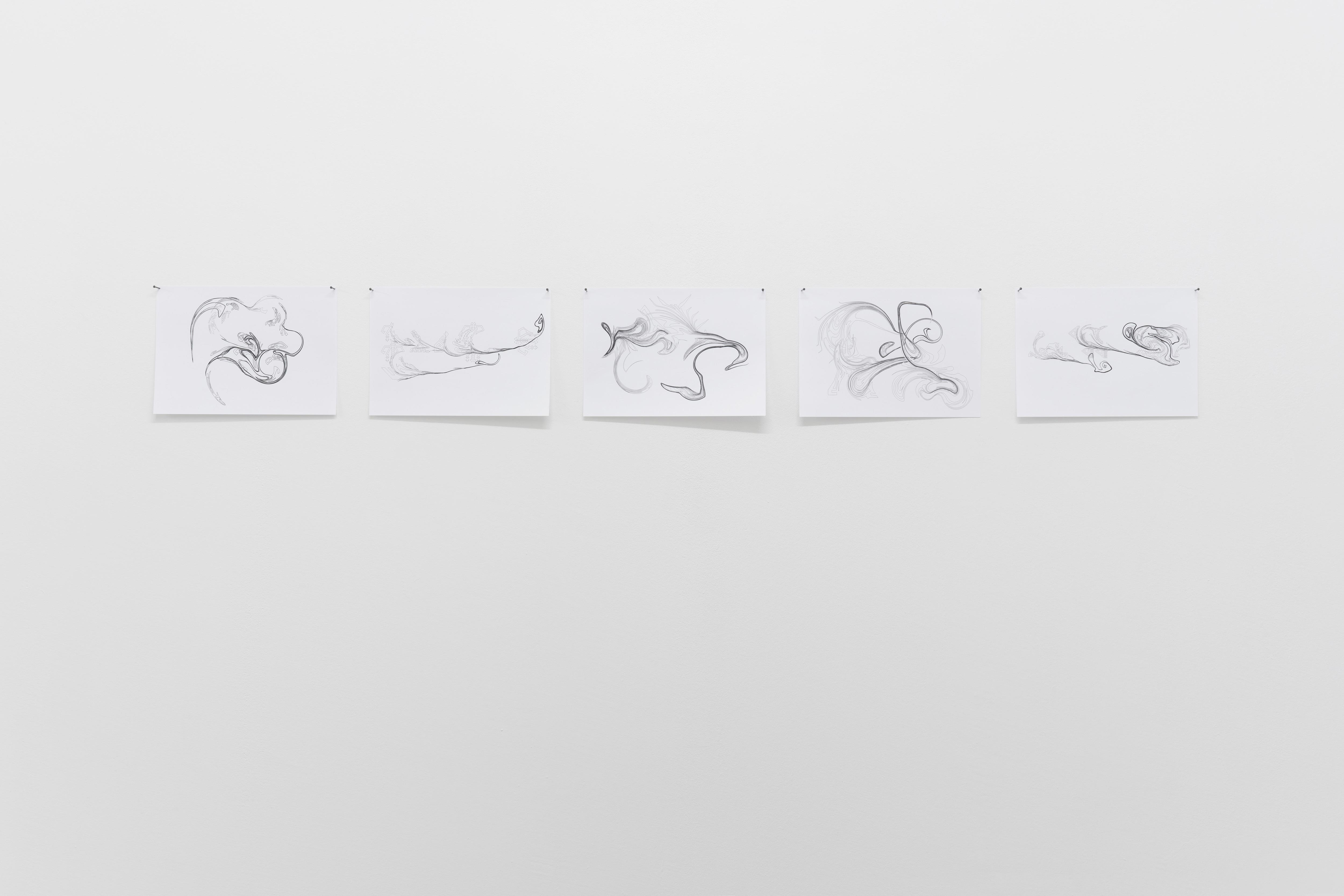 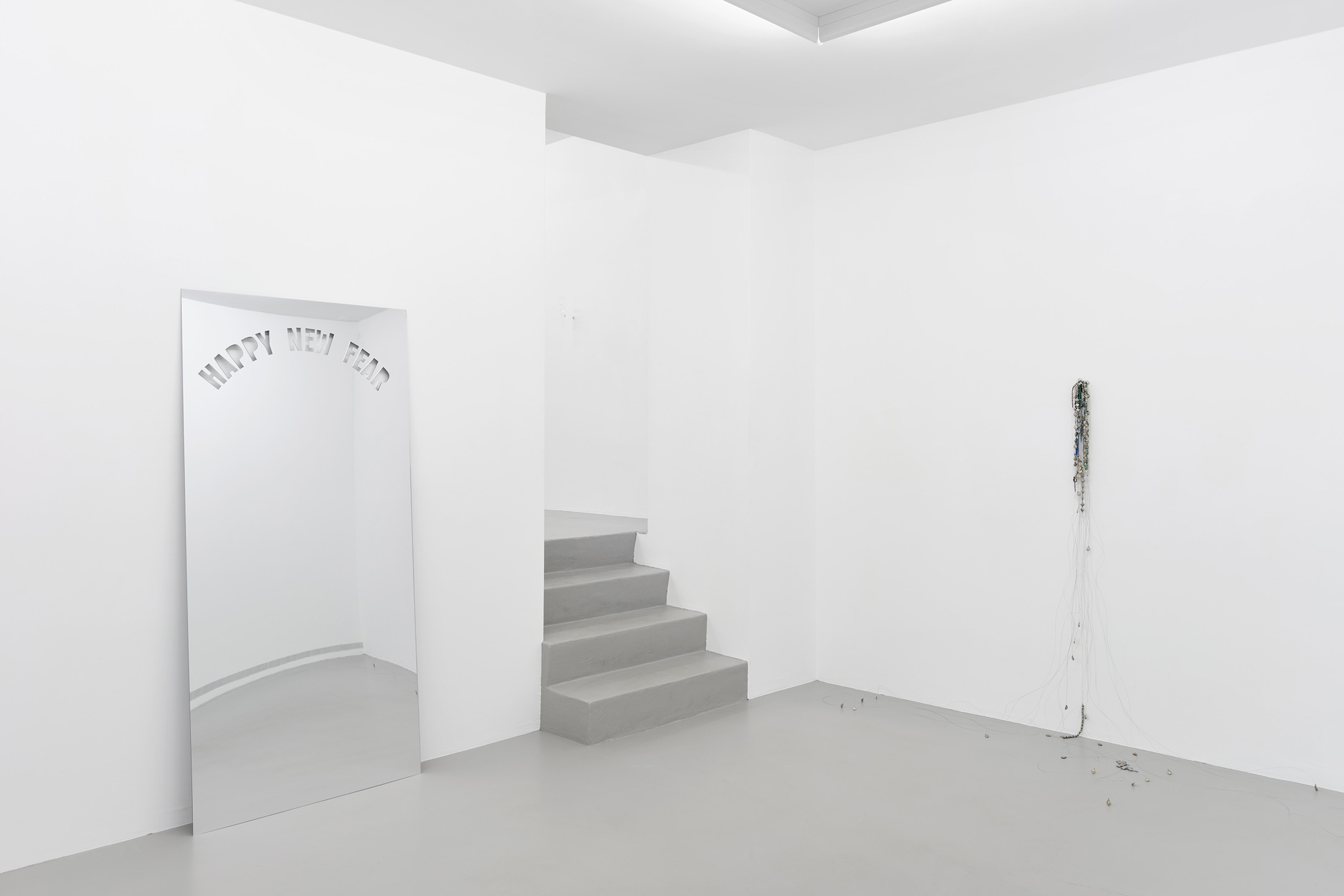 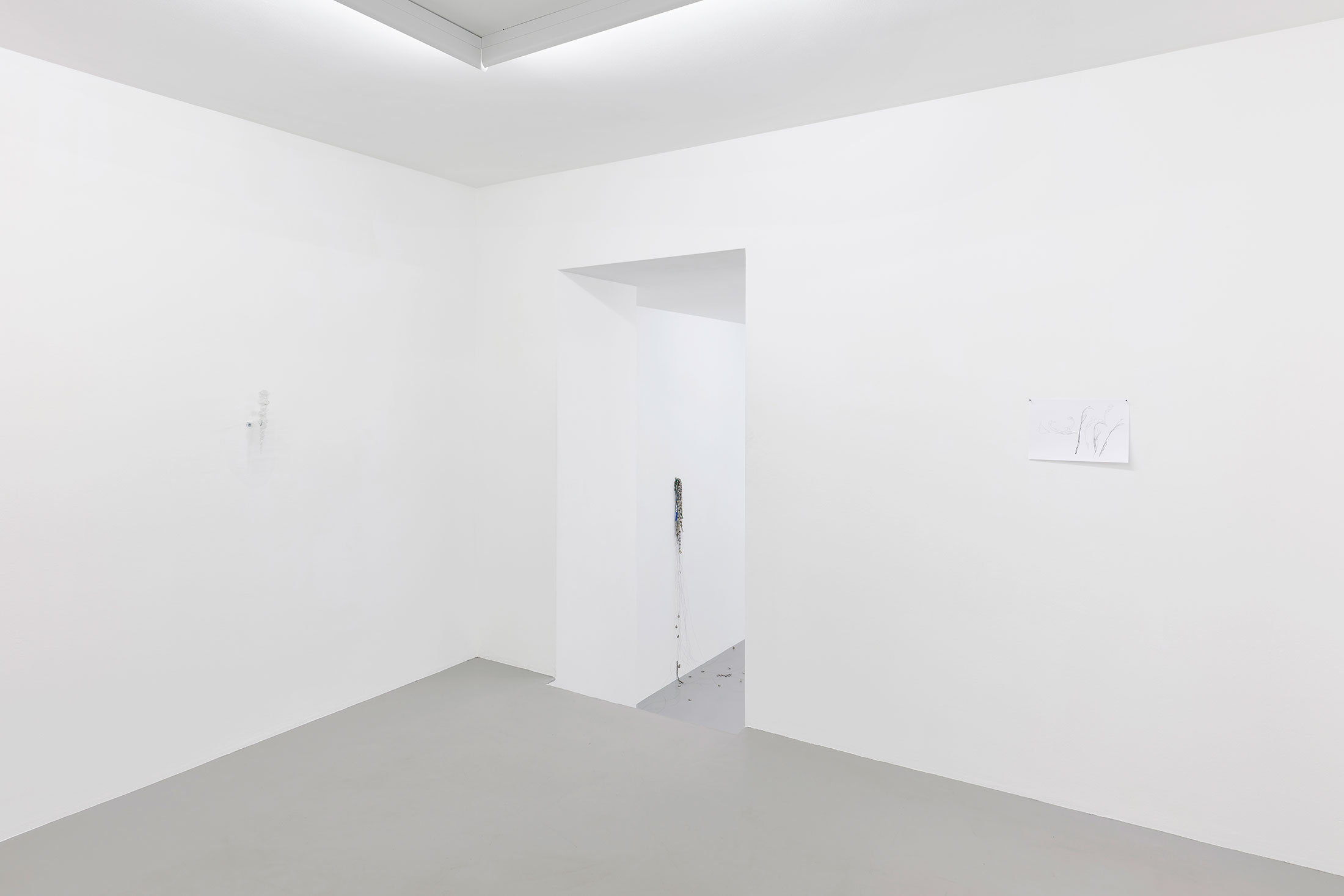 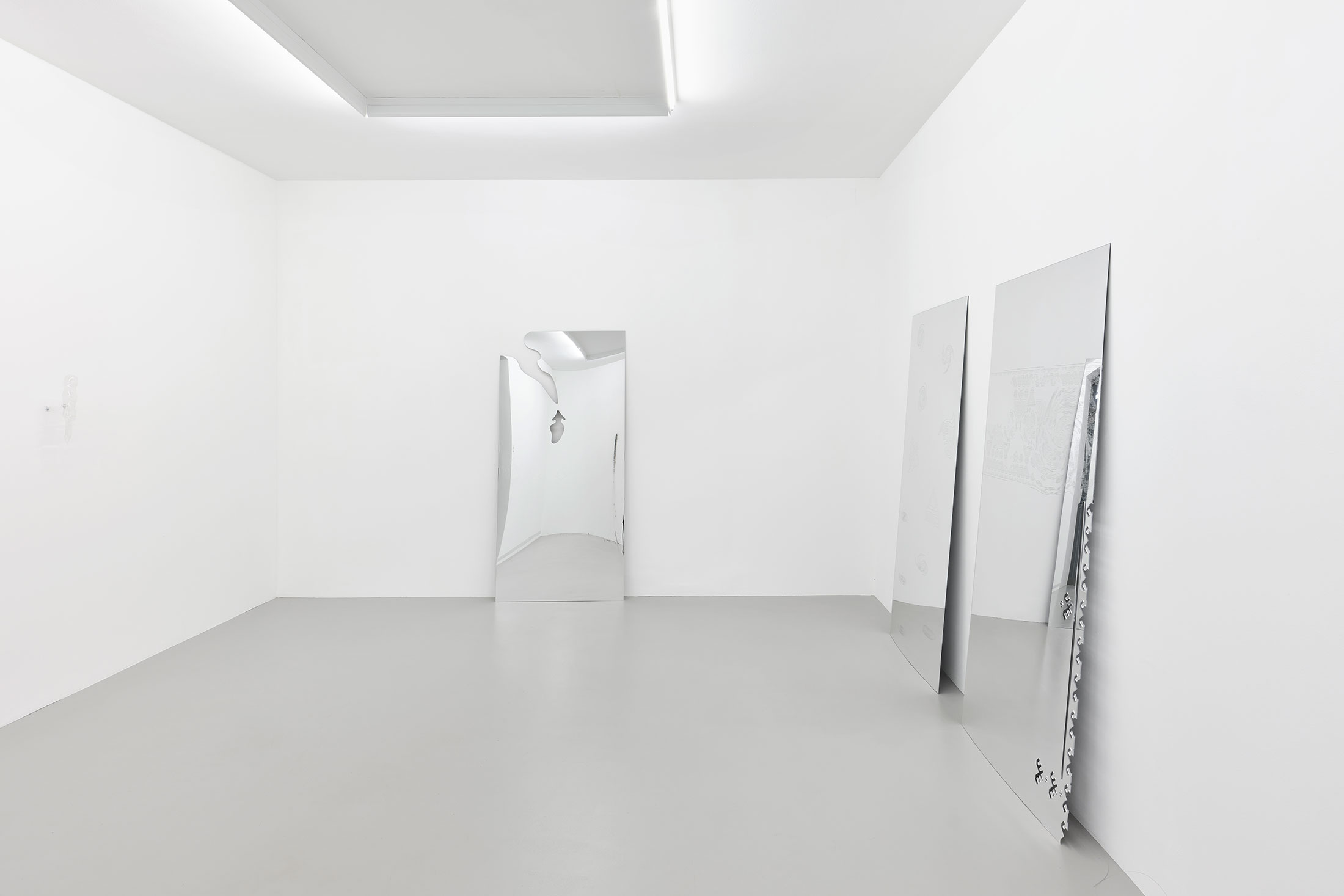 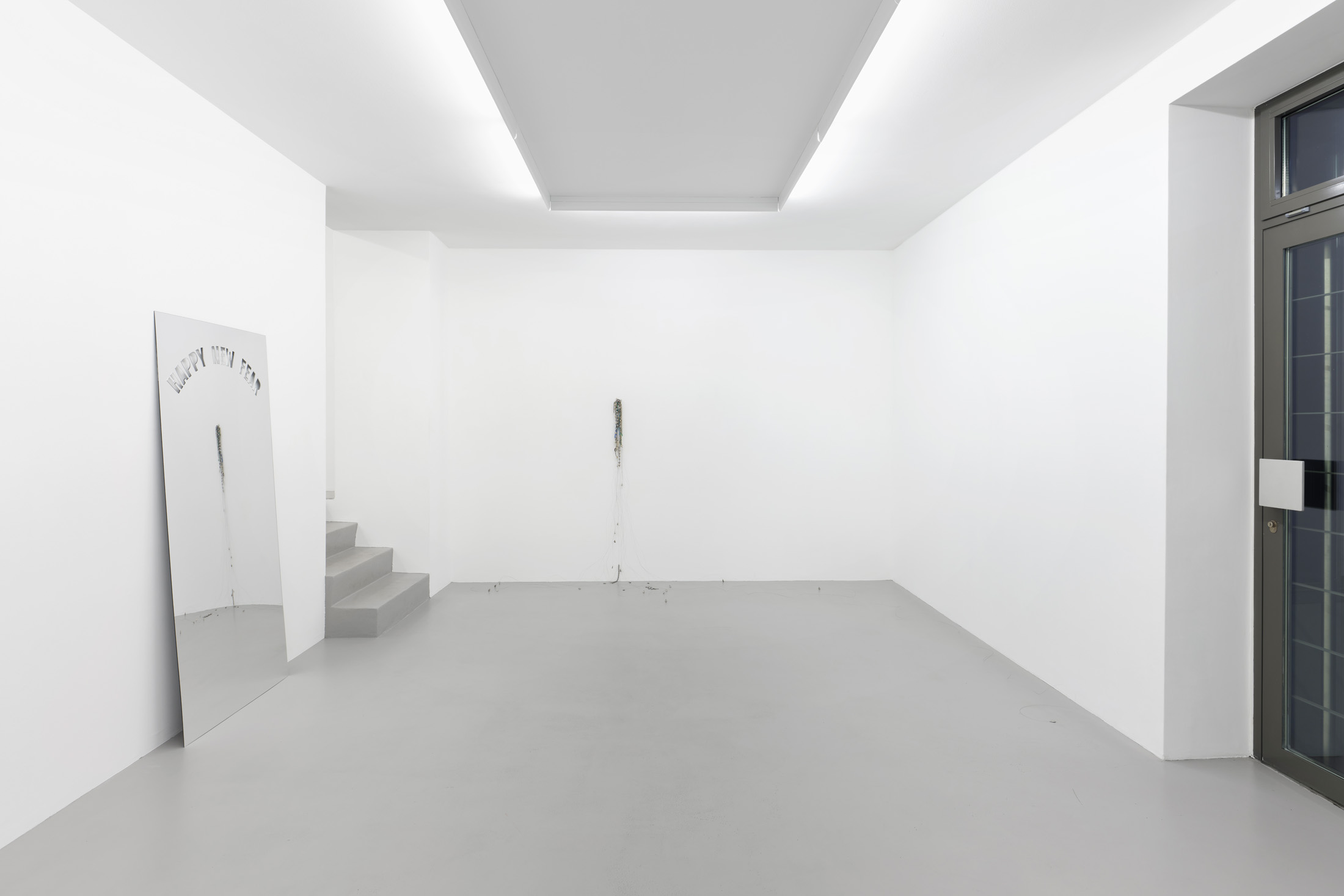 Looking at Ceylan Öztrük’s most recent body of work is impossible: the transparency, translucency, and the reflectivity of the materials dispose of any sense of a separation of the object of the work and the subject of the viewer and things blend, melt, confuse, exaggerate. The attributed physical qualities of the objects palpitate with the tension that is at the core of the threads that Öztrük has always drawn on in her practice—what are the embedded knowledges buried/suffocated by materialities that can be liberated through the self-reflexive artist and what does this self-reflexive artist even do with herself? How can works remain in flux with the self-doubt that is transferred onto them?

One response in form that Öztrük provides is through coldness—the reflective surfaces that permeate multiple works in the exhibition feel cold to the touch and this coldness is at odds with the conflicting temporality of the works. The stalactites are frozen moments, the mirrors reflect transitory images, the beads appear to have been adjusted just so for a passing second.

One of the visual and cultural references that Öztrük draws on is the figure of the elibelinde [hands on waist], a motif that is very widely used across Anatolian cultures, called as such as it resembles a woman with her hands on her waist. As the language of Turkish does not denote gender, the assigned gender of this motif is through the fertile, female-ish looking figure that resembles the figure of the hourglass. The phrase is also used to refer to women with strong wills, who will not just take things as they are, who are resilient. As Öztrük borrows this form, she strips offs its connotations and rather focuses on what is embodied within the figure. These figures, when deprived of a background of a kilim or a textile, become symbols of the positionality that Öztrük seeks to occupy—a self-reliant and self-reflexive figure that is both closed off but infinitely repeated. In other words, for Öztrük, the figure ceases to be a motif but becomes a manifesto through its language and its self-containedness. She not only says “I have my hands on my waist”—which she does—, but also says that there is no other place from which one can make work. These figures, when engraved on the mirrors, necessarily host and will continue to host the viewers.

Responding to the space of Galerie Philipp Zollinger, the more-than human sized- mirrors on which texts as well as the textures of hands on waist have been engraved respond to the spatiality of the space. The works are not site-specific; they are in dialogue with the state of spaceness that the architectural elements or lack thereof have produced. Öztrük’s mirrors are self-aware mirrors in that knowing that the mirror does not purely, directly reflect off an image but rather throw it back into our retinal space, they present figures and words that surround this image as well as the space that we are currently occupying, becoming one with the exhibition space only through creating self-conflicting images that are fighting for our attention. In other words, Öztrük multiplies and disrupts the act of looking in, gently pushing us back into the realm of our own sense of being, reminding us that what we see is not only what we don’t get, but also all that we seek to be is futile yet necessary.

The beads that are familiar in form become estranged through their mode of exhibition, as their suspension abstract them to become forms and forms only. Their reflective surfaces produce an antithesis to the mirrors in that instead of capturing and throwing back, they engage with the space through themselves. The fluidity of the form in contrast to the state of suspension as a static mode of being is Öztrük’s self-awareness about just how much can happen in and through objects and the shift of disembodying the beads from a necklace to an element in space achieves that defiantly.

The stalactites that the artist has made of blown glass is the key that unravels the exhibition as the threatening form contrasts with the fragility of the material and the transparency. Öztrük recognizes that what she seeks to do in this exhibition is a double-edged sword: while making works that are self-reflexive about the act of making work, this self-reflexion is also never about her but always about her. Self-reflexion, at its best, is uncomfortable. Through this exhibition, Öztrük has found a language of forms that transmit and distort this state of being uncomfortable, while acknowledging that this is an urgently dangerous premise. By remaining with the question of “Why self-reflex now?”, the moment of what she does expands into the past and into the future, piercing through the now to truly become a specular apparition that is a truer embodiment of all that has come to pass than any image or form could ever be.